Dysport™ is a purified formulation that has been shown to deliver temporary improvements in moderate to severe frown lines between the brows and also reduce the appearance of crows feet and forehead wrinkles by relaxing the muscles that cause them to occur. Similar to Botox®Cosmetic – Dysport™ stops the signal from the nerve to the muscles, ultimately resulting in a reduction of muscle activity and temporarily preventing contraction of the muscles that cause frown lines.

What Does Dysport™ Treat? 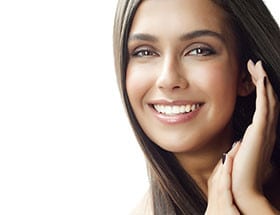 Dysport™ – similar to Botox® Cosmetic is a purified protein administered in a simple, nonsurgical procedure that temporarily improves the appearance of moderate to severe frown lines in people ages 18-65. Dysport™ is used to treat:

How Does Dysport™ Work?

Dysport™ is a neuromuscular blocking agent that works by temporarily reducing the contractions of the muscles that cause those persistent frown lines that have developed between your brows, on your forehead or crows feet. Dysport™ is injected directly into these muscles and works by blocking the transmission of nerve impulses to the injected muscles; this reduces the activity of the muscles that cause those persistent lines to form. Within a couple of days, you’ll see a marked improvement that can last up to four months.

Who is a Candidate for Dysport™?

Men and women between the ages of 18 and 65 may be a candidate for Dysport™. Aura offers free consultations with our board certified physicians that will help determine if treatment with Dysport™ is right for you.

What Can I Expect During Dysport™ Treatment?

The most common areas treated with Dysport™ are the muscles between your brows, forehead and crows feet. Generally, each patient can expect the following:

Dysport™ is a simple, 10-20 minute, non-surgical process. There is minimal discomfort and only a few tiny injections are administered. No anesthetic cream is required prior to the treatment.

How Long Does Dysport™ Last?

After treatment with Dysport™ results are typically seen in a couple days and last up to four months. Results vary with each patient. To maintain results, Dysport™ is recommended every four months. If patients choose to not continue treatments, the moderate to severe frown lines between your brows, crows feet or forehead wrinkles will gradually look like they did before treatment. WE WANT TO HEAR FROM YOU