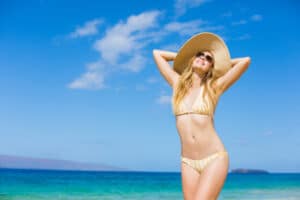 The human body is really good at storing fat for a rainy day. Of course, this leftover of our caveman days doesn’t have the same relevance today with a Safeway right down the street as it did when we could go a couple weeks between good protein-filled meals.

It appears our modern bodies didn’t get the memo of our newfound plethora of available food. They still effectively store extra calories as fat. Even if you’re near or at your ideal body weight, you have areas of fat that you just can’t do anything about. You diet, you exercise, but the fat just stays…not unlike that uncle who has been out of work for the past, oh, 17 years, and visits at Christmas.

That’s when it’s time to get smart with that unwanted fat, SmartLipo from Aura Skin Spa.

Traditional liposuction as it was first performed in this country was a pretty violent affair. The patient had to be under general anesthesia because the doctor had to move the cannula around quite aggressively under the skin to break lose the fat for suctioning out. The cannulas used also had to be fairly large to adequately suction out the fat the larger pieces of fat.

The result was some serious tissue trauma, and you know what comes with tissue trauma, bruising. Bruising from traditional liposuction could be extensive and last for a couple months.

That’s why we bring a laser to liposuction party at Aura Skin Spa. First we inject a saline solution with local anesthetic into the target area. Next we insert a very small cannula (tube) approximately 1.0 to 2.0 mm in diameter that contains a laser fiber. The laser emits energy at two wavelengths that cause the fat cells to rupture and liquefy. The dual wavelength energy also triggers a skin tightening reaction in the skin to reduce laxity. Once the laser has done its work, we insert another small cannula into the same 3mm incision and suction out the liquefied fat.

SmartLipo removes the fat without anywhere near as much tissue trauma and tightens the skin. It is ideal for removal of fat from the abdomen, love handles, saddle bags, and thighs. It is also good for areas with skin laxity such as the neck and arms.

Patients often return to work within 1-2 days after their SmartLipo procedure. A compression garment is typically worn after the procedure for several days to a few weeks to help the body conform to its new slimmer contour and to alleviate swelling.

Want to get smart about your liposuction? Call the team at Aura Skin Spa, 415-788-3800 and ask us about SmartLipo.

Call {tel} or contact us below to schedule a consultation today!